THE REAL THING by Lizzie Shane 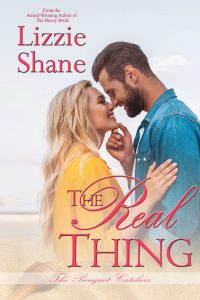 Not your average girl next door…

As Hollywood’s hottest leading lady, Maggie Tate is a master of illusions—so much so that she’s even managed to convince the world she’s perfectly happy. But when her estranged aunt leaves her a run-down beach house in sleepy Long Shores, Oregon, she jumps at the chance to escape the bubble of her perfect life.  What better place to lay low than the tiny coastal town where she used to spend her summers?

But when Maggie arrives in Long Shores, nothing is quite like she remembered…including the boy next door.

The unforgettable boy next door…

Ian Summer was the first boy Maggie ever kissed, but he’s all grown up now, with a daughter of his own.  She knows she should keep her distance—no matter how rugged and manly he’s turned out.  With her disastrous relationship track record, she’s sworn off men, but she’s never been able to resist the emotionally unavailable ones.

Ian isn’t the ambitious musician he was when Maggie knew him.  He’s got his daughter to think of now, and a steady job as the town handyman.  He doesn’t need a diva actress coming in and rocking the boat—but the more time he spends with Maggie, the more glimpses he catches of the girl he used to know.  And the more right it feels.

Could this be love?

Maggie can play the love interest like no one else, but with Ian it isn’t an act. After a lifetime of Hollywood illusions, could this finally be the real thing?