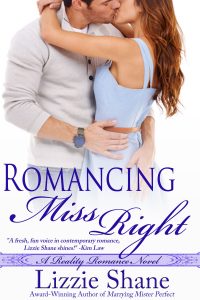 They aren’t in it for love… but love has it in for them.

Marcy Henrickson isn’t looking for love as the latest Miss Right on the reality dating show Romancing Miss Right. She’s realistic enough to know the odds of finding true love on national television are astronomical–but the chance that the exposure will boost her next book onto the New York Times Bestseller List? That’s a risk worth taking. And if she’s the one picking from the handsome Suitors, how can she possibly get hurt?

The last thing Craig Corrow wants is to fall in love. San Diego’s Favorite Bad Influence is looking to transition from local radio shock-jock to national television host and a reality dating show is his ticket to fame and fotune. He’s there to stir things up and Miss Right is just another pawn in his gameplan…

Until he meets Marcy and she isn’t the fake reality princess he was expecting. She’s all too real–and so is the way he feels about her. But when he’s faced with a choice between love or money, can this bad boy give up his villain ways and get the girl?