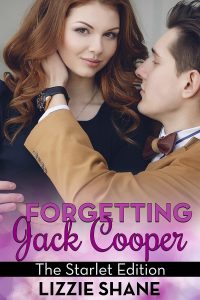 Actress Ginny Jones knows all too well that sometimes her mouth moves faster than her brain. Case in point: badmouthing a beloved cinema icon on tape, a recording which was then leaked worldwide. Her costar Jack dropped her flat, along with her agent and so-called friends, leaving her in a career free-fall. It’s taken her six months to scrape her self-respect back together and get another chance – a no-budget indie flick filming in the middle of nowhere. Then, to her shock, Jack shows up on a mission to make amends – and he’s got a sexy new Brit in his entourage. A Brit who makes Ginny feel alive for the first time since the scandal broke.

Jude knows he shouldn’t have let Ginny assume he was Jack’s new bodyguard, but how can he tell the girl whose career he helped ruin that he’s actually the tabloid reporter who first released the now-infamous Tape? He’d thought Ginny was nothing more than a shallow starlet who needed to be knocked down a few pegs, but the more he gets to know her, the guiltier he feels…. and the more he falls for her. Making movies – like spinning tabloid stories – may be all about illusion, but nothing’s felt more real to Jude than what he’s experiencing with Ginny. Still, can she ever forgive him when the lights come up on his deception?

GET ALL THE FORGETTING JACK COOPER BOOKS

Jack Cooper, current Hollywood It man, has a blockbuster new movie in the works all about redemption – only he’s never had to apologize for anything in his life, and he knows how lucky that makes him.

To prepare for the role and score some publicity points along the way, Jack undertakes a round-the-country tour to make amends to those whose lives he’s inadvertently harmed. Only what Jack doesn’t realize is that fate is taking a ride-a-long on his redemption tour, and each of his long-overdue apologies will lead to unexpected romance…